At the OPEC summit last week, the Saudi crown prince called on Russia to reduce their production of oil as the global demand dipped due to the coronavirus pandemic. Oil prices on Monday plunged by 24% which is the steepest drop since 1991. With Russia refusing to cut production Saudi is set to increase its
Read More
The recent drone attacks on Saudi Arabia’s oil processing complexes have had a sudden and marked impact on the world’s crude oil prices. With up to 5% of the world’s crude oil supply wiped out in the attacks, this has caused one of the biggest and most sudden shocks to the oil market in recent
Read More
2019 marks the fortieth anniversary of Gall Thomson’s launch of the innovative Flip-Flap Marine Breakaway Coupling (MBC). The device has since been in constant daily use in thousands of locations throughout the world in the toughest of marine conditions. Over a span of four decades, Gall Thomson’s MBC has proven time and again that its
Read More
The effectiveness of Marine Breakaway Couplings in minimising risk to FPSO transfer operations from the perspective of reeled or in-air catenary reeled configurations August 2018 Content Purpose and objectives of this report. Introduction and definition of a FPSO facility. Foreseeable operational risks associated with FPSO loading. Specific product transfer risks from FPSO to Convectional and
Read More
There have been many cases of oil spillage during bunkering, and this is a cause for concern as the effects of oil spillage are far-reaching. Besides affecting the profitability of the company, oil spillage also has adverse effects on the environment and poses a serious safety hazard as it could lead to an explosion. Utmost
Read More 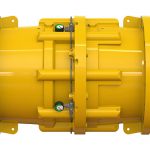 Gall Thomson are specialists in Marine Breakaway Coupling technology with over forty years field based operational experience in delivering secure offshore hydrocarbon product transfer. The Marine Breakaway Coupling (MBC) was developed to aid the safe movement of crude oil, heavy fuel oil and similar products. In the event of a vessel breaking its mooring or
Read More
The new marine breakaway coupling launched by KLAW is called the Marine2, which is 25% lighter and 32% shorter than alternative marine breakaway couplings available in this sector and was designed and developed to reduce the stresses placed on hoses used on offshore hose reel applications. Marine2 Breakaway Coupling This new Marine2 design has been
Read More
The price of oil ended up even lower on Wednesday as record high U.S oil reserve figures. Crude stockpiles in the United Sates rose by 1.5 million barrels last week and now stand at 520 million barrels. Even with the OPEC cuts in production and strong compliance at around 94% the price remains low. The
Read More
The price of oil has shaped the financial fortunes of many oil producing countries. To address this, the Organisation of Petroleum Exporting Countries (OPEC) has looked to reduce the output of oil not just from their members, but non-members as well. Non-member Russia has shown its willingness to freeze its production of oil at present
Read More
In the recent years, container freight industry has been on the downward trend in regards to profit made cutting down to high sales revenue obtained from this industry. This phenomenon has seen carriers struggling to find a permanent solution to this catastrophe compelling some to work independently embracing such initiatives like organisational cost-cutting. These efforts
Read More
We use cookies to ensure that we give you the best experience on our website. If you continue to use this site we will assume that you are happy with it.Ok