Despite the ongoing development of pipelines across many parts of the world, the transportation of fluids such as crude oil from their source to their destination is still largely done via ocean-bound tanker. Considering the potential flammability and highly polluting characteristics of these typically transported substances, safety is always at the top of the list of considerations, and this needs to be especially the case in the dangerous and often extreme conditions found at offshore installations such as drilling platforms.

The transfer of the fluids from one vessel to another, for example from the rig to the tanker or from tanker to the terminal facilities, is one of the most risky parts of the whole operation. The use of flexible hoses to connect the vessels is necessary when at least one of them is floating, and yet if these hoses rupture and allow the fluids to escape, the dangers are clear. Not only is there the risk of injury to operators, the non-human damage can be considerable, both to assets and the environment. The costs involved in cleaning up an oil spill are also considerable, as is the downtime caused by the need to replace damaged equipment. 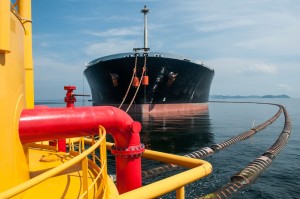 Because of these considerations, a reliable way of mitigating against incidents is vital, and one of the most widely used and most effective methods is the safety device known as the Marine Breakaway Coupling or MBC.

What is a Marine Breakaway Coupling (MBC)

Marine Breakaway Couplings are pieces of hardware that are routinely specified for inclusion in new offshore installations where fluid transfer occurs, and for the shore facilities which receive the cargo transported from them. They are also often retrofitted to installations with a history of tanker breakout or similar problems, or to facilities where a risk assessment has indicated that such events are a significant risk.

They are passive devices which quickly shut off the flow of fluids within a hose should a predetermined load tolerance or internal pressure be reached. Common situations that can cause these conditions are if a tanker loses position, or if flow regulator equipment fails and causes a sudden surge in pressure, both of which can cause flexible hoses to rupture or be split from their connections.

MBCs work by employing bolts constructed using materials with a precisely known tensile strength, which will fail under a design-determined load, which in turn activates a valve instantly cutting off the fluid flow. As the design is based on known and fixed physical properties of the bolt materials rather than any detection equipment, monitoring software, or manual operation, MBCs are extremely reliable and quick to react to any incident, requiring no power source or human oversight.

The Purpose of Marine Breakaway Couplings

An MBC is designed to protect against, or mitigate the effects of, two main types of accident.

Its primary purpose is to protect against hose rupture or connection failings caused by physical strains – for example, a tanker moving out of position owing to mooring failure. Should this happen, the flow of fluids will be near-instantly shut down before the situation deteriorates further. The secondary protection is against a sudden surge in pressure within the hose and fittings that can cause failure at vulnerable points such as joints and fittings, potentially leading to oil spillage.

Even with the best safety precautions in place, accidents will inevitably happen, and if a hose carrying fluids under pressure ruptures, the situation can be very difficult to bring back under control before severe damage is caused. Having an MBC in place will quickly prevent the problem escalating.

Even when using an MBC, there will still be some spillage and pollution in the event of a hose rupture incident, but compared to an unconstrained failure the amount will be minimal, lessening the amount of damage and reducing the amount of clean-up needed.

One of the major benefits of the MBC device is that it is totally passive: it requires no power to operate, no monitoring to spot a problem, and no operator action required in the event of an incident. The design of a marine breakaway coupling means that it is all but fail-safe and is instantaneously activated when needed. This also means that it will be effective in a major incident, when other active safety systems might themselves sustain damage.

Although MBCs have a fairly wide range of uses, they are typically used for the loading of tankers with fluids at sea, in most cases crude oil, or discharging loads at port. They are often also used for loading vessels with oil derivatives such as Liquid Petroleum Gas, where safety is obviously of paramount importance.

MBCs have become increasingly important as oil and gas installations have over the years moved further offshore. They are an invaluable safety measure in the harsher environments often found further out to sea, where not only are accidents more of a risk, but also much harder to deal with and to clean up after.

How to Select an Appropriate MBC

Considering that the typical design lifetime of a marine breakaway coupling is between fifteen and twenty years, it’s essential that the correct type and specification of MBC for your requirements is decided upon before being brought into service.

A full analysis of the potential loads in the hose system should be conducted prior to selecting and installing an MBC. This will in the first instance confirm whether or not the device is actually required, but will also provide the manufacturer or supplier with the necessary information to recommend the most suitable type and specification of device for the proposed situation.

Although there are many minor variations on the marine breakaway coupling theme, there are two main types available, with the choice between them depending on the type of fluid being transferred and other parameters.

#1 Petal Valve Type MBCs – These types are designed with a full sized bore, making them the most suitable choice for higher viscosity liquids such as crude oil. These kinds of MBC offer several advantages, the main ones being that they are fully piggable and have zero headloss.

#2 Flip-Flap Type MBCs – These do offer some headloss although still at a very low level, but have 100% shut-off. These types of MBC are most often used with lower viscosity fluids, including kerosene and liquid petroleum gas. Their usage for these liquids means they are more often found at shore installations rather than offshore.

The exact specifications of the MBC that will be required for your purpose will depend on the following:

– The type of fluid to be transferred (eg crude oil, or processed oil products such as gasoline, kerosene, or liquid petroleum gas)
– The type of terminal (eg jetty, SPM, CBM etc)
– The maximum flow rate required or expected
– The kinematic viscosity of the specific fluid being transferred

The manufacturer of the marine breakaway couplings will work closely with you to ensure that the appropriate model type and configuration is chosen before installation.

Although MBCs are highly reliable devices with a long service life, to avoid incident and keep the devices in optimal operation, there are several considerations that should be noted during fitting and use.

– Although MBCs play a vital part in safety of marine fluid transfers, there have been a small number of instances where they have been activated unnecessarily, either through poor installation, or inadequate understanding of their operation by operators. Because of this, it is highly recommended that training is given to all staff who will be in contact with MBCs during their operation.

– If the use of MBCs is planned, the manufacturers of hoses and related equipment should be consulted as this may influence the design, configuration and installation of their products.

– Equipment operators should be trained in recovery of the MBCs and hoses after any activation, and the necessary tools and facilities to enable this should be included when fitting the device. Improper recovery can result in damage to the MBC and other equipment, as well as risking further pollution.

– Spare MBCs should be available on site so as to allow switching out of the devices for maintenance without sacrificing protection or pausing operation.

– Hoses with attached MBCs should not be handled or transported by vessels capable of exceeding the load tolerance of the MBC, so as to avoid inadvertently activating the device. If a suitable vessel is not available, then the crew of the one used should be properly informed of the need to stay within the MBC’s load tolerances, and should have been given adequate training on how to ensure they do so.

– MBCs should be kept clean where possible so as to enable visual inspection and detection of any partial separation, corrosion, or other potential problems.

If these considerations are followed correctly, then a properly specified, installed and operated MBC system will provide protection and mitigation against incident for at least fifteen years, and will represent an extremely cost effective investment in safety.

There are many companies that supply MBC?s worldwide, but off these companies most are supplied by the main manufactures. The leading suppliers and manufactures of MBC?s are Klaw Products Ltd and Gall Thomson. There are other suppliers such as Offspring International and MIBreak which also supply these technologies.

Klaw Products are global leaders in the supply and manufacture of Breakaway Couplings and emergency release systems and have been providing solutions since 1980 and have supplied over 10,000 units throughout the world. For further information click here

MIB Italiana was formed in 1966 in Casalserugo in Italy and is a supplier of customized connection and safety solutions for the Oil and Gas sector.